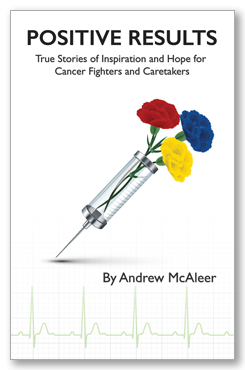 In August 2005, less than two years after losing his mother and father to cancer—dying six days apart—Andrew McAleer was diagnosed with fourth-stage melanoma. Less than three years later, at age forty-one, fulfilling a lifelong dream to serve his nation, he graduated from Army Basic Combat Training. At age forty-four, holding the rank of sergeant, he would go on to complete a tour of duty in Afghanistan as a U.S. Army Historian. A few months after returning from Afghanistan, McAleer was again diagnosed with fourth-stage melanoma. This time four doctors told him it was inoperable. In Positive Results, Andrew McAleer shares his personal, heartfelt, and inspiring stories about his fifteen-year battle with cancer, first as a caretaker and then as a patient.

“Using skills honed as a mystery writer, each chapter of Andrew McAleer’s Positive Results grabs the reader and unrolls a vivid story of his true battles with cancer. Every oncologist and cancer patient – hell, anyone who wants to see what being fully alive means—must read this book.”
—John Merrifield, M.D. author of Abby’s Deal

“Andrew McAleer’s Positive Results is one of the most inspiring, motivating, and heartfelt books I have ever read and re-read! This heroic memoir will remain within me forever.”
—Thomas Donahue, author of Fraternal Bonds

“Positive Results is the truly remarkable account of McAleer’s fight to survive against all odds. An amazing, amazing journey readers must take with him.”
—Kris Meyer, Producer, The Lost Son of Havana and Executive Producer Plimpton! Starring George Plimpton as Himself

Welcome to WordPress. This is your first post. Edit or delete it, then start blogging!