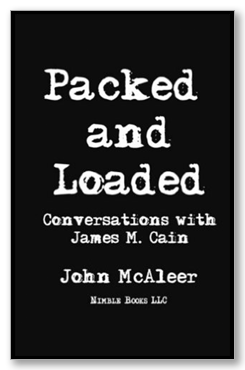 In these never-before-published interviews, the author of Double Indemnity, The Postman Always Rings Twice, and Mildred Pierce discusses his first notions to be a writer, his newspaper days, his Hollywood years, and Marilyn Monroe with brutal honesty and in a tone and vernacular that only a master like Cain could command. Also in this critical, tell-it-like-it-is study, Cain reveals his thoughts on Hemingway, Fitzgerald, Arthur Miller, Hammett, Chandler, and, in his eighty-fifth year, what he planned for his future. Packed and Loaded is James M. Cain “unplugged”, at his finest. The manuscript is seasoned with original epigraphs about this major American writer from masters like Elmore Leonard, Sue Grafton, Robert B. Parker, Dennis Lehane, Peter Lovesey, Phil Lovesey, Edward D. Hoch, Katherine Hall Page, Robin Moore, William G. Tapply, and the grand master of mystery himself, Rex Stout.

John McAleer graduated from Harvard University with a Ph.D. in English Literature and was the author of over a dozen books, including an Edgar Award-winning biography of Rex Stout. He was nominated for the Pulitzer Prize for his biography of Emerson. He wrote critically-acclaimed studies of Thoreau and Dreiser, as well as a definitive novel on the Korean War, Unit Pride.