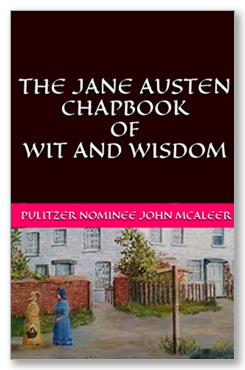 The Jane Austen Chapbook of Wit and Wisdom brings to the Jane-mania world John McAleer’s exhaustive collection of her epigrams, aphorisms, and maxims. Austen’s Wit and Wisdom is a must have volume sure to satisfy Austen’s loyal followers (or “Intimates of Jane” as they are affectionately known) and perhaps even rival Franklin’s Poor Richard’s Almanack. Austen scholar and Pulitizer nominee John McAleer collected hundreds of Jane’s most pithy, humorous, and proverbial writings and prepared them for a mass production chapbook. Now, for the first time, this legion of dedicated Jane followers, in one complete volume, can enjoy her inspiring and often humorous maxims over and over again — and moreover, have them ready to recite! Interest in Jane grows and grows. Austen’s Wit and Wisdom is here to inspire and gratify Jane’s readers who wish to ponder her words and discuss them as if she were in propia persona. Thanks to Jane’s piquant, incisive mind, and her incomparable way with words, that enjoyment comes through intact in Austen’s Wit and Wisdom. In Austen’s Wit and Wisdom chapters are compiled and organized by Jane’s observations on the human condition and spirit in such areas as marriage, feminism, family, and religion.